Fighters Source® Comes Back to NYC For Their National Tournament Finals 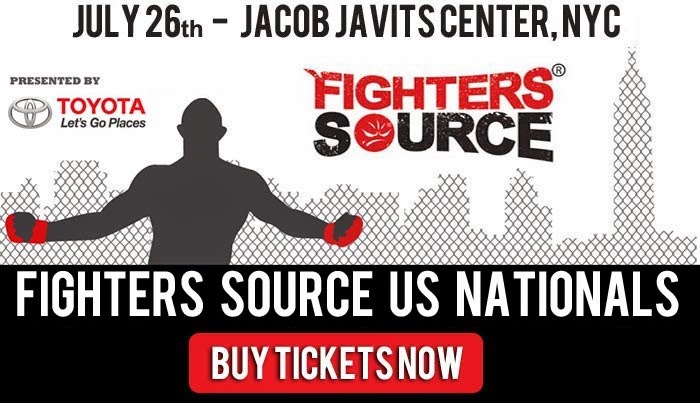 On May 23rd, 2013 Fighters Source® made their fist appearance on the New York amateur MMA scene with their Kings of New York event at the Hammerstein Ballroom. I was pleased to be able to cover the event last year and interview Fighters Source® CEO Anthony Medina leading up to their debut New York show. Over a year has gone by and much has changed. Since that time Fighters Source® has gone national with a well reviewed amateur MMA tournament that culminates with a final event at the 2014 MMA World Expo on July 26th at the Jacob Javits Center in New York City.

With only 6 days to go before the Fighters Source® national tournament finals and their third appearance in New York City, I once again have the pleasure of interviewing Anthony Medina about what's in store and how the brand has evolved over the last year.

NYMMANOW:  It has been a year since the Fighters Source® debut in NYC at the Hammerstein Ballroom; which I also covered for NYMMANOW. Please tell us what has gone on with Fighters Source® during that time. What has changed since last year?

MEDINA:  Our complete business model has changed.  We have become a league instead of a single promotion.  The difference between a league and a single promotion is everything.  A single promotion has only their network and database to recruit talent.  A league uses the joint databases of multiple promotions to discover national talent.  A single promotion markets individual fighters. Fighters get injured, grow old, or retire for personal reasons. Their marketing momentum stops right there, then they must be reignited for their next start.  A league markets a team; teams which are consistent, and can be followed by generations. It is true that the athletes of each team may change, but the team itself remains. The marketing continues to multiply season after season.  Single promotion matches are handpicked by a matchmaker. Fans never know when their favorite athlete will compete next.  They are also in the dark as to who he/she will fight next. This is difficult for converting casual fans to avid fans.  A league runs a season and schedule.  Fans know when their fighter/teams compete next. They also know who they will be fighting, and where the event takes place. This makes tracking and predicting, simple for the fans. Single promotion Champions of a single promotion hold their title until a matchmaker gives them an opponent that can beat them.  A league, by implementing a season, athletes must start from scratch each year. For an athlete to become a three time champ, he/she must work his/her way to the title three separate seasons. This creates true champions, and legends. Single promotions are never ending, at first this may sound like a good thing, but it can get stagnant. With a league, fans enjoy the excitement of a fresh start, the anticipation of a finale, and the time off for their other interests. To put it simple, single promotions flood the market.

NYMMANOW: As you know, amateur MMA is fast becoming a national issue regarding fighter's health, safety and oversight. Fighters Source® hosts events in several states including New York. Unlike professional MMA, only about half of state athletic commissions in the United States oversee amateur MMA; some quite poorly, others quite well. What have you learned about the amateur MMA scene in America during your travels? How did you choose the locations for each branch of the national tournament?

MEDINA:  Each branch was chosen by the various team owners throughout the country that wanted to be a part of the Fighters Source® League. Fighters Source® qualified 8 promotions from around the country and invited them to participate in our Inaugural year as a League.  As far as the first question, where should I start, LOL! Unlike most promoters, that are bounded by their local territory, I have had the unique opportunity to experience various different state and foreign athletic commissions each with various rules and regulations.  States are not uniform in their operations when it comes to amateur MMA.

NYMMANOW: As you know, MMA in New York is a controversial topic with professional still banned and amateur unregulated by the NY Athletic Commission. How have you gone about overseeing sanctioning in your New York events and how has it different from other states? Your first time out here was regulated by the MMA Ki Federation (KICK International). Most recently you used ISKA. How will the Fighters Source® finals at the World MMA Expo be regulated?

MEDINA:  There is very little difference.  We use 3rd party sanctioning bodies as we have done with our other events in New York and Florida. The only difference is how scrutinized MMA is in New York.  Since our last show in New York at the Hammerstein, over 30 amateur sanctioned, accredited shows have been put on, and I would like to think that Fighters Source® played a big part in leading by example about how important sanctioned fights are for the safety of everyone involved.

NYMMANOW: I personally love the state team format in this tournament and think it has great potential for growth. Can you speak to how the idea of a national tournament with state teams arose and any lessons you may have learned along the way?

MEDINA:  It arose right after our New York show.  We saw there was a larger need to include other promotions to put forward the absolute best US Team.  We took the old IFL (International Fight League) model and adopted it to the amateur side of MMA, which seems to have blossomed under those ideals.  Almost like the NCAA National Wrestling Tournament consisting of different schools from different states, and them having national Champions from each weight class.  I have learned that the United States is very fragmented in the various rules and regulations for MMA among the various states.  It is our hope to have nationally unified MMA rules for not only athletes but for promotions as well.

NYMMANOW: Teaming up with Paul Paone and the World MMA Expo is a fantastic opportunity. How did this come about?

MEDINA:  It's funny that you ask.  My partner, Adam Meyers, CFO of Fighter Source®, and I, were visiting the Hammerstein to investigate throwing another event at that location, and Paul was also looking to also possibly hold the Expo at the Hammerstein.  At the end of our site visit, Paul, Adam and I sat in the hotel lobby and spoke of the benefits for both companies for the Fighters Source® 2014 Nationals being the main event for the Expo.  We are very happy to be a part of the MMA World Expo and look forward to our next one.

NYMMANOW: What's next for Fighters Source® after the Expo. I know you have taken teams overseas in the past. Any plans to take the winners of the finals to represent the U.S. abroad?

NYMMANOW: Thanks for taking the time to speak with us. Any final thoughts?

MEDINA:  This past season has been such a great experience.  We have met a lot of different people, different cultures, from various different states.  We were able to experience events in snow, in rain, in heat, indoor events, outdoor events, etc., and it was all great.  The common bond was Mixed Martial Arts.  We look forward to the rest of this season and for the seasons to come. We, as a League, will continue to work toward legalization of Pro-MMA in New York, and the inclusion of MMA in to the Olympics. Thank you to NYMMANOW for this interview, and we will see you at the Nationals!

NYMMANOW
Coalition to Legalize Mixed Martial Arts in New York: A non-partisan group of organizations, gyms, business owners, and individuals who volunteer to support the legalization and regulation of mixed martial arts in the state of New York. For information about how you can help us, contact Stephen Koepfer at 718-728-8054, follow on Twitter @sambosteve, or e-mail NYMMANOW@gmail.com

If you would like to support the ongoing educational and lobby efforts of the Coalition to Legalize Mixed Martial Arts in New York, please click the button below. Thanks for your generosity! For suggested donations, check our Donor page. Let's bring MMA to NY!